When I was first asked to participate in a joint effort of PM bloggers to simultaneously publish a series of posts about their field, I asked myself a very simple question: what would be the single most basic thing about Project Management that I would consider critical for everyone to know?

It didn’t take me too much time to think of an answer. I just remembered what my Martial Arts instructor used to say: “Any Art is meaningless if you cannot apply it to your everyday life in addition to its intended purpose!” So it became clear to me that the most basic thing people should understand about Project Management is that it’s an art that could be applied not just to managing projects at the workplace but to everything else we do in our lives.

Let’s see what it takes to project-manage your life in order to live like a Boss! 🙂

Project Managing starts with its famous triangle of Scope, Cost and Time. The successfulness of a project is determined not only by their final goal being achieved, but also by its relative quality, spending in relation to planned budget and the ability to meet every objective on time. As every PM knows, we almost never encounter the ideal case when all the components are equally met. Emphasizing scope means spending more time and more time means more resources, while trying to speed things up and to cut costs may have some serious repercussions on quality.

While dealing with this conundrum many PM’s sooner or later arrive to a very important understanding: success should not be measured by achievement of some strictly defined goals, because the situation is always fluid. How can you explore the opportunities provided by this fluidity? By introducing the concept of Quality as the common currency.

To better understand the concept, think about someone who has been just laid off after being employed with the company for many years. An important part of his upset feelings could be a feeling of failure – because his “My life” project has been postponed or even canceled. However, if he immediately finds a good job with a better salary it would be clear for him that what happened was actually a good opportunity to push his career up. It’s easy for us and for him to measure the general impact of this event on the “My life” project because money is a common currency we use to measure the quality of our lives.

However, as money represents only one side of the PM triangle, what about the other two? Well, our protagonist could have equally used this opportunity ether to spend more Time with his family (or dedicate to something else he may have wanted to do for a long time but couldn’t) or to changing the Scope of his career by becoming a contractor or opening a business. My point here is that because the Quality of Life is equally influenced by all three components of the PM triangle, it could be used as a common currency to measure the success of everyone’s “My life” project. 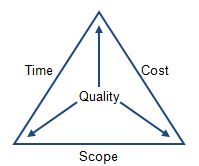 This perspective gives us some pretty serious advantages in managing our lives:

So, do you want to live like a Boss? Start managing your life like a boss does then 🙂

P.S. As mentioned in the beginning, this post is published as part of a first ever project management-related global blogging initiative to publish a post on a common theme at exactly the same time. Seventy eight bloggers from Australia, Canada, Colombia, Denmark, France, Italy, Mexico, Netherlands, Poland, Portugal, Singapore, South Africa, Spain, UK and the USA have committed to make a blogging contribution and the fruit of their labour is now (literally) available all over the web. The complete list of all participating blogs could be found here <http://list.ly/list/7Or-pmflashblog-contributors?>, so you’re welcome to go and check them out! 🙂

16 thoughts on “Living like a Boss: Project-Managing your life”