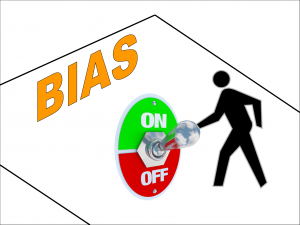 When previously discussing Risk Management  I already mentioned that the possibility of being biased while making a critical decision or engaging in important activity is a risk in its own right, that should be managed along with other risks. What are the peculiarities of managing your biases as risks in regard to what we know about the known types of Risk Responses in Management?

According to existing knowledge of Managing styles, there are four possible responses that Managers can apply to emerging risks: Avoidance, Control, Acceptance and Transfer. The preference of a certain response by a particular Manager tends to correspond well with his or her personality, but ideally we’re supposed to choose the appropriate response according to the specific risk and its context. Let’s discuss the usefulness of each response in dealing with the “risk of being biased”:

Staying away from aircraft helps you reduce the risk of experiencing a plain crash; total abstaining from eating may greatly lessen your risk of choking to death 🙂

Regrettably, in regard to biases, this means AVOIDING MAKING DECISIONS, because, as we remember, this is the kind of activity when we’re most vulnerable to biases. As it also happens to be the most crucial activity of Managers , avoiding it practically means that you STOP BEING A MANAGER altogether. The only legitimate case of avoiding bias by abstaining from making a decision is postponing the moment of truth until more data is available. Just remember to communicate  your “decision not to make a decision right now” to your Team – or they may perceive you as being indecisive.

Not sure if your teenage daughter may go to that party? Let your spouse make the decision! If all went well – you can take the credit for smart delegation, if not – you’ll have someone to blame 🙂

This one is a bit trickier than the previous one. While ideally, Manager should make his or her own decisions, we have already mentioned that making decisions in a group  may have its advantages when properly done. This means that transferring the risk of biased decision to others is not necessarily an attempt to escape from responsibility. It’s actually the opposite: proper delegation and calling meetings to discuss important decisions frees the Manager’s hands for other tasks, as well as actually reducing the risk of bias. What’s important to remember here is that when you delegate the decision-making on a matter to someone, you’re not relieved from your duty to check on the mission’s progress from time to time and what is more important you are still accountable for the outcomes as a manager. Accordingly, when the opinions of your Team are divided, you may still be required to make the final call. Of course, there is always the possibility to bring an Expert from outside, and transfer the risk to him 🙂

The best example here is car insurance. While life insurance is statistically irrelevant for most people by definition, with health insurance having a somewhat higher potential relevance, the odds of your car experiencing at least a minor RTA which will require repairs is very high. By accepting this fact you can concentrate on the exact type of insurance you want to get, instead of pondering whether you should have one at all.

The most important positive comment I want to make about this type of response is that it is the most honest one. Fighting biases  is a hard task, aggravated by the fact that they plague our most important tool for fighting them – our head. So this is an honest and a completely logical thing to accept the fact that SOME WRONG DECISIONS WOULD BE MADE NO MATTER WHAT! But if you’ve built a good Team that knows what to do in time of emergency, if your system has built-in redundancies, and if you always have some resources in store to deal with the damage as soon is possible, you’ve done your job as Manager and can accept the risk of a biased decision. To be on a safe side, this strategy is best served when utilized in a frame of a conservative policy. Don’t make sudden moves – and your mistakes wouldn’t be too big. Think about yourself not as a fighter jet, but as a bulldozer – you’ll get there, eventually 🙂

Eat slowly, preferably – salad; teach your daughter how to behave and how not behave during a party; learn defensive driving. If you have resources to spare – it’s much more logical to spend them on prevention rather than intervention.

This is the trickiest Risk Response, because it requires you both to commit resources right now and to plan the best way of doing it (also – right now). However the advantage of this strategy is obvious – you’ll always have more time for an attempt to control the risk while everything is still OK than for reaction to a risk that already materialized, probably causing some immediate damage. In regard to biases there is just one point to state here: learn about them, know to recognize them, train to negate them – this is the way to control them. This isn’t easy, but at least you have an advantage over other people – you’re reading this blog 🙂

There is no Avoiding making decisions, so try to avoid this strategy. Transfer and Acceptance are legitimate response strategies if used correctly, but there is nothing like being in Control!