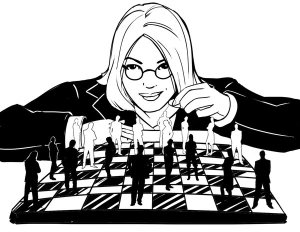 After talking to people about my post on Delegation I decided to expand the discussion to other related issues in Management that everybody knows about, but the general understanding remains vague, preventing fruitful actions. Today I would like to talk about the most frequent complaint of employees about their Managers – them being Micromanagers.

The evils and the basic symptoms of Micromanagement were well-discussed long before me, so I chose a very specific aspect of the issue: how sure can we be when classifying someone as a Micromanager? As the stigma that comes with the type is pretty serious by today’s standards, we better be really sure not to stigmatize managers, who may show some symptoms of Micromanagement, but are nevertheless well-respected and appreciated by their teams.

The most frequent reason why this may happen is that it’s not always easy to distinguish between Micromanagement (manager’s tendency to deny employees any influence on the process of their work by constant interference) and Hands-On Management (manager’s tendency to actively participate in the working process beyond the basic requirements of supervision). As follows from the above definitions, the former will naturally have a very negative impact on the functioning of the team, while the latter may actually be a very useful practice. So how do we recognize the difference?

While Micromanaging is usually caused by manager’s lack of confidence in his status, Hands-On Management is usually the result of manager’s high confidence in his abilities and Leadership skills. Having a justified expectation of his efforts being accepted and appreciated by the Team, the Hands-On manager leads from the front, aptly intertwining the guidance and supervision of specific tasks into progress for larger-scale goals. The motivation of the Hands-On manager could be as egocentric as that of the Micromanager, however he never loses the sight of Team’s interests even when closely minding his own, because he doesn’t feel threatened by his Team.

My post about the intricacies of the Tactical/Operational/Strategical levels of analysis provides a good view on the distinction between the levels, so feel free to refer to it, while here I’ll concentrate on their relation to Micromanagement. Basically, the greatest problem of Micromanagers is that they frequently find themselves stuck on the lower analytical levels, no matter how you call them. Instead of setting the goals and dividing responsibilities in order to reach a strategic goal as Hands-On managers do, they tend to constrict themselves to the technical details and the performance of smaller tasks that could be successfully engaged by their employees. Hands-On managers could also be proud to demonstrate their mastering of technical aspects at every occasion, but they usually utilize this knowledge in managerial tasks, such as easily recognizing mistakes and providing solutions when the employees are unable to proceed by themselves. Their focus thus freely moves between the levels allowing them to solve problems of different magnitude.

Micromanaging is almost universally being perceived as negative by the employees. After all, no one likes when to feel that he’s not trusted, and that their risk for taking the blame for failure are much higher than their chances to receive credit for success. More than that, denying people the ability to control their own workflow makes the process inherently unpleasant for them, so their basic reaction is to distance themselves from work and everyone involved with it as much as possible. Hand-On managers usually do not invoke such a negative reaction in their employees. Their availability and guidance tend to promote team spirit, and while putting an emphasis on sharing the credit (even stressing their critical input to the project), they do not deny it from others, being also ready to take responsibility when something goes wrong. This line of behavior develops trust, and when employees would have prefer their manager not to interfere in their work at all (because everybody thinks they don’t need managers :-)), they are ready to accept the interference of those in whose good will they trust.

Thus, we can arrive to a simple understanding: even if the Hands-On manager may interfere in the work of their employees as much as Micromanagers do, there is a critical difference between them, so let’s not use the “Micromanager” stigma too freely.

See you next week 🙂